You know the best part of a brownie - that chewy yummy bit around the edges of the pan? Well, here you have it - in a cookie! No more fighting, there's enough for everyone. 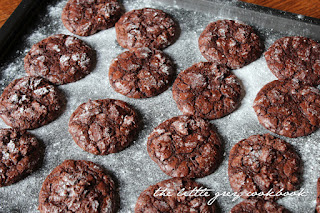 I first got turned onto this recipe on Pinterest ... it was pinned from Divine Baking but it turned out she "adapted" the recipe from Epicurous. Yep - it's nearly identical ... so I'll compare what they did to what I did ... I don't think I can really call it an adaptation because the basis for the recipe is the same ... I just changed a few things.

Melt 1/2 the chocolate in glass bowl in microwave - I set the timer 30 seconds at a time, taking it out and stirring it each time until it's smooth. Cool slightly.

Use a fork to combine 3/4 cup sugar, cocoa, cornstarch and salt in medium bowl. On low speed, stir dry ingredients into meringue.

Stir in lukewarm chocolate and the remaining chocolate cut into chunks. The recipe says the batter will be very stiff. Mine never has been but if your kitchen is warm I would recommend refrigerating the dough for at least a half hour. 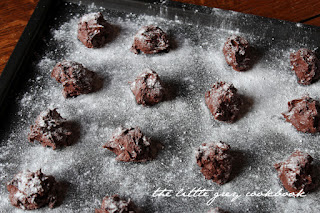 Then you're supposed to roll the dough into balls - yuck! It's sticky and sometimes not stiff enough. So I just drop it by teaspoonfuls directly onto the baking sheet. And they turn out just as pretty and round without all the hassle but be sure to leave enough space between because they will spread.

Instead of rolling the balls in powdered sugar I just sift it generously over the top - perfect and a lot less messy! (In the pictures I wasn't generous enough ... will remember to use more next time. I was also reading the comments on Epicurous ... oh my goodness, there are a ton of comments about adding things like cinnamon to the dusting sugar, or chopped jalopenos, ginger or almonds to the batter. Hehe, this is obviously for me ... not the hubby except maybe the almonds.

Epicurous says this quantity makes about 24 cookies. Diving baking says it makes 18. Yikes, I don't know what size there cookies are but mine made 32 and they were plenty big enough - a tad bigger than my camera lens cap - so definitely big enough.

Roll 1 rounded tablespoon dough into ball; roll in sugar, coating thickly. Place on prepared sheet. Repeat with remaining dough, spacing 2 inches apart. Bake until puffed and tops crack, about 10 minutes. Cool on sheets on rack 10 minutes. Transfer to rack and allow to cool.
Posted by peawink at 9:14 AM 0 comments